A 3-way Ball Valve belongs to the family of basic ball valves but this valve has a little design difference compared to a simple ball valve. They can be used for applications where more than one media is used in the system. 3-way Ball Valve manufacturers developed these valves so that they can be used in the form of diverting valves, mixing valves, or isolation valve according to the requirement of the system and so the piping system can also be attached accordingly.

3-Way ball valves are very useful to simplify the task where a complex valve system or multiple valves are to be used in a pipeline. With the help of a 3-way ball valve, one can save so much space, time, labour, and material that will otherwise be wasted if you use multiple 2-way valves to accomplish a similar task.

In this article, we will learn more about how these valves function and their work principle, how they differ from 2-way ball valves, and their types & applications.

What is a 3 Way Ball Valve?

3-way ball valves are the most common multiport valves among the others. They work in a way where either one inlet and two outlets or two inlets and one outlet that is like a diverter or a mixer valve.

3-way ball valves are widely used because they provide a cost-effective and simple solution to manage both cut-off and flow patterns from a single valve body.

A three-way ball valve’s function is defined by a single, but critical, internal design distinction. The flow pattern or contour of the port via the ball within the valve is a crucial design distinction. The flow patterned valve balls on most three-way ball valves are drilled as a capital L, which has two flow paths, or a capital T, which has three flow paths.

Instead of having only two ports (entries), the 3-way ball valve has three. This multiport system may divert fluid from the primary valve input to two distinct directions (rather than just one) via two independent valve exits. The primary flow line is served by two separate and alternative inlets, which is another common usage of the 3-way ball valve. 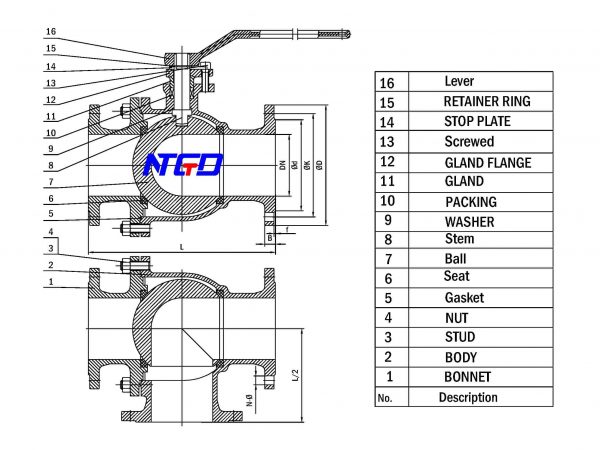 A 3-way ball valve’s ball can be configured in either an L or a T configuration. These exact types of ball valves are also available in a floating or trunnion design, with either a flanged, socket, or threaded valve end, and a variety of polymers, metals, alloys, and stainless-steel materials.

By rotating the handle or actuator to 90 degrees, the L-pattern type or diverter valve shifts the flow from one port to the other. Assume that the bottom port and the left port open the first position. The media flow is diverted to the right outlet after a quarter rotation in the counter-clockwise direction. The passage of media is blocked by a quarter turn in the opposite direction, permitting a complete rotation of 180 degrees. A 270-degree turn will restrict media travel as well. A complete 360-degree rotation, on the other hand, allows the valve to return to its original position. Two of the three ports are, in a sense, available at the same time. As a result, the valve can have two shut-off positions and three flow options.

Because the media of two intake flows can be combined inside the T-pattern, it is called a mixer valve.   In a view, all three ports can be opened together. The T-pattern ball valve will also function as a diverter, allowing it to function similarly to the L-type valve. With a quarter-turn of the handle, it was possible. T-patterns can’t have a bubble-tight shut-off, but they can limit flow to two ports or make it easier to pass through all three.

The T-pattern ball valve acts as a mixer, separating the media into two opposing directions. Its design, like the two-way ball valve, allows the T-pattern to divide the flow or simply produce a straight-through flow pattern. For the vertically installed T-pattern ball valve, the normal port is still open. Turning it a quarter turn is the only method to deflect the flow. The media flow will not be disrupted by a 180-degree turn.

A 3-way Valve is classified in a few different ways.

Based on the type of ball support.

Based on the body construction method.

Based on the type of operation.

These valves can be used in multiple ways in industries such as Petrochemicals, Food processing, Petroleum, Power Plants, and can be useful for domestic purposes also.

The multiple ways that they can be used are:

Ball valves are among the most versatile industrial valves available and we as 3-way ball valve manufacturers can provide some of the best valves. If you’d like to learn more about these valves and how they may benefit your company, contact us. You can also comment and share your opinion about our products here with us.