Globe valves are one of the earliest valve types utilized for throttling applications of all sizes due to their superior controllability and range. Globe valves are a type of linear motion valve that is used to stop, start, and regulate flow. A Globe valve’s disc may either be fully lifted from the flow stream or completely closed.

Globe valves offer strong throttling abilities, allowing them to be used for flow regulation. Although these valves have slightly larger pressure drops than straight-through valves, they can be employed in situations where the valve’s pressure loss is not a limiting area of concern.

We are Globe valve manufacturers and suppliers, in this informative article our experts tried to give you a brief idea about a Globe Valve’s working, features, benefits, and applications.

REQUEST A QUOTE FOR MORE DETAILS

What is a Globe Valve?

Globe valves, as the name indicates, are linear motion valves with spherical globular bodies. Because of their similar design with other valve bodies, internal pipework must be checked to identify the globe valves. Globe valve manufacturers have recently introduced innovative designs, which have resulted in globe valves losing their conventional round body shape.

Globe valves are often employed as on/off valves, but they may also be utilized in throttling systems. The globe valve has good throttling capabilities as its operation allows gradual change in distance between the disc and seat ring. Globe valves feature a disc that may open or seal the flow stream completely. This is accomplished by moving the disc away from the seat perpendicularly. To enable fluid flow via the valve, the annular distance between the disc and the seat ring progressively changes. The fluid turns several times as it passes through the valve, increasing the pressure.

Globe valves are typically fitted with the vertical stem and the fluid stream linked to the pipe side above the disc in the majority of places; when the valve is entirely closed, this benefits in maintaining a tight seal. The fluid flows through the gap between the disk’s edge and the seat when the globe valve is open. The flow rate of the medium is controlled by the gap between the valve disc and the valve seat.

A handwheel connected to the stem is used to open and close a standard globe valve. The stem is moved along the threads by the anticlockwise movement of the handwheel, which lifts the valve from its seat and thereby opens the valve. The operation is reversed when rotated clockwise. The valve rises off its seat when the pressure is greater than the valve’s pressure. This design of the valve does not allow any reverse flow.

The valve seat or valve plug is unlikely to be damaged by the fluid, even while partially open. The needle valve is the most common form of globe valve used for flow rate control. The pressure drop in the globe valve is larger as compared to other types of valves because the flow path is S-shaped. Furthermore, because the valve stem has to be rotated multiple times to operate the valve, there is a risk of the gland seal leaking. Moreover, because sealing of the valve needs tightening the valve stem until the valve plug presses down firmly against the valve seat, determining the precise moment at which the valve is entirely closed is difficult. There have been instances when the valve shaft has been turned too far and the seating surfaces have been damaged. Instead of rotating, another alternative is for the stem to slide along the valve. This will assist to lower the stress on the stem and, as a result, prevent the stem from bending.

Globe valves are so-called because of their spherical body form, with an interior baffle separating the body into two parts. They’re employed in applications that need frequent operation and throttling. The valve body comprises three moving parts that are the disc, valve stem, and handwheel. The body comes in three distinct designs, as well as three different types of discs, based on their application.

Different designs of discs of globe valves are:

1.     Plug/Needle Type Disc: The plug disc is considered the best among all the other globe valve disc types and is ideal for throttling applications. A plug disc is built from a long-tapered metal plug that sits into a cone to provide a large sitting area.

2.    Conventional/Ball Type Disc: The seat and disc structure of the conventional type disc is constructed of a ball-shaped metal disc. It has a short taper and sits well against a flat-surfaced seat in the body. This type of globe valve is quite popular and cost-effective for low-pressure applications. Despite the fact that the ball disc may throttle flow, it is usually employed to start and stop the flow. 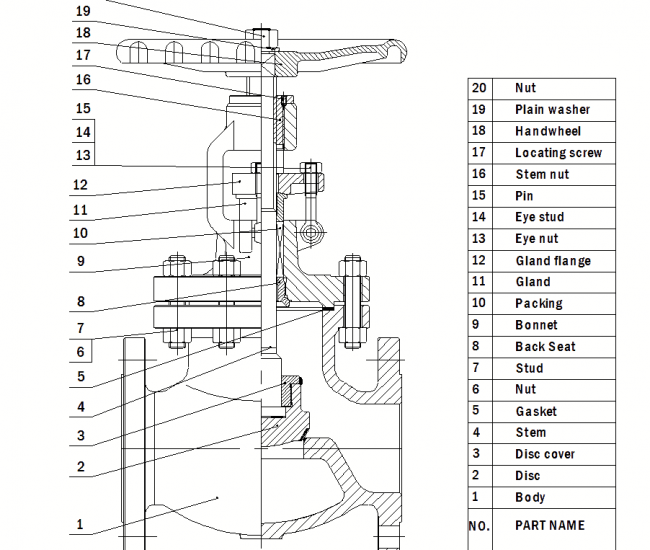 Different types of Globe valve based on body types:

Z-type/Standard Globe Valve: The simplest globe valve body design is the Z-body, often known as a straight-through globe valve. It’s frequently employed in water-related applications. The seat of a Z-body globe valve is separated from the globular body by a Z-shaped diaphragm or barrier. The disc and stem travel at right angles to the pipe axis because the seat is horizontal. The stem goes through a huge aperture at the top of the valve body, which is connected to the bonnet. Manufacturing, installation, and repair are all made easier because of the symmetrical design.

Y-type/Oblique Glove Valve: The linear action of oblique design globe valves, that are also identified as cross-flow globe valves, is obtained from the slope between the axis of the input and outflow ports. The considerable pressure drop present in globe valves is reduced by this design. When the valve is fully open, the seat and stem are at a 45° angle to the media flow, resulting in a straighter flow route. The stem, bonnet, and packing are all kept in a pressure-resistant enclosure by the Y-design. This valve is ideal for high pressures and other demanding applications.

Globe valves provide several benefits and drawbacks for consumers. Some of those are:

Globe valves could be utilized in a wide range of applications until and unless the pressure and temperature restrictions are not exceeded and the process does not need the use of specific corrosion-resistant materials. Even when the seat is partly open, the fluid has a lesser chance of damaging the seat or valve plugs. Globe valves are suitable for systems requiring frequent stroking, vacuum, or a range of temperature variations.

Here we have provided some of the typical applications of Globe Valve.

In this article, we as Glove Valve Manufacturers & Suppliers tried to explain the Globe Valve and its various types. For further assistance on a globe valve or any other industrial valve, you can contact us and our experts will guide you for the selection of bast valve as per your requirements.